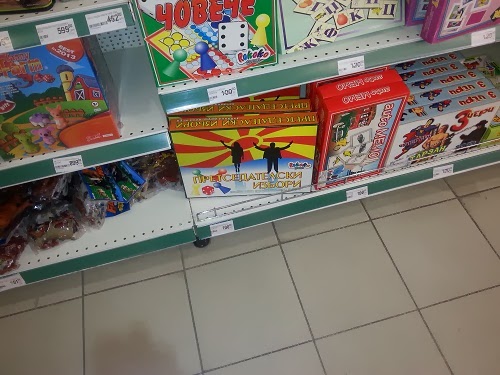 Presidential elections. A title written in capital letters on a box that resembles that of the well-known board game “Ludo”, but of some other contents. And another picture. On the front there are figures with hands raised up which associates victory, and in the background there is the state flag. The back writes: for aged 7-97.

Which means it is for kids, too! But this is nothing new. Elections and their importance are introduced to children at school through textbooks that claim to be consistent with the age of the children. However, university professors and experts do not agree with that. On the contrary, they warn that care should be taken in conveying the contents to children, especially to the younger age, to which only elementary knowledge of democracy needs to be introduced, not to force other contents. Or, to take them to campaign rallies, which according to them is nothing other than their abuse.

“Every citizen who has reached the age of 18 has the right to vote”, it is written under the picture in the textbook “Society” for fourth grade, represented with a ballot box and a hand putting a ballot paper in it.

Fourth grade children are nine or ten years old, and learn about elections, their relevance, how the local community functions and what representative democracy is. For example, the book says that “through a referendum (voting) citizens decide on matters regarding their settlement”. On page 69 in the same textbook pupils learn about municipal authorities, where, among other things, it says that elections for the municipal council are held every four years, as well as for the mayor, who is said to be “elected in general, direct and free elections by secret ballot”.

On the next page they suggest pupils to visit their local community. The following questions are an exercise:

– “When were the last municipal elections held in your municipality?”

– “How many members are there in your municipal council?”

– “Can a discontented citizen file a complaint against the municipality?”.

In the textbook children are also taught about democracy. And not only that, but what direct democracy is and what representative democracy is.

Concerning the fact whether children at the age of nine or ten need to learn about elections, as well as about their possible abuses in terms of politics, we discussed with those responsible at the First Children’s Embassy in the World “Medjashi”. It raises the question: Is it clear to children what exactly elections are? If children could answer this question in details, it could be assumed that they are often exposed to discussions with political-party content within their family or in their environment”, says Dragi Zmijanac, director and founder of “Medjashi”. He says that children should be informed of how society works, but appropriately adapted to their age. Although he adds: “We doubt that a child could answer the question: How many councilors are there in your municipality?, he says. Zmijanac adds that children still need to be informed about what is happening in the municipality and be previously consulted if decisions are taken regarding them.

From “Medjashi” they say that in the recent years children have been used as tools in the hands of certain political parties. Examples enumerate presence of children in rallies, then in electoral headquarters, in advertisements, or in cases where they stick posters or hand out leaflets with political content and other advertising material.

“Children cannot be physically removed not to hear the news, but there is a line, a red line, which should not be crossed. They listen. How they process it is another matter, but when they are put in such a function, then it is about abuse”, says Ilija Acevski, Professor of Urban Sociology. He illustrates examples of children who are taken to rallies or abused for sticking posters. Acevski emphasizes that through textbooks children are prematurely taught the basics of democracy because according to him, the most appropriate age for teaching political terms is after the age of 12. “Children at the age of ten do not perceive government, but a building. Suppose they listen to the sessions in parliament where MPs say everything. When a ten-year-old child listens to it, he does not understand who these people are.

It is not the time to form opinions, they are victims of adults who form their opinion in advance. But it is unacceptable to abuse them in this manner”, emphasizes Acevski.

Biljana Kamcevska, Methodology Professor at the Pedagogical Faculty “St. Kliment Ohridski”, says that the content offered in textbooks pertaining political notions does not correspond to children’s age. “However, the authors of the textbooks are not to blame, but those in charge of preparing the curriculum. As to choose the textbook, authors tend to cover everything in the curriculum”, she says.

From the Ministry of Education and Science they assure that curricula are made by expert committees in which teachers, professors and councilors from the Bureau for Development of Education or the Center for Vocational Education and Training take part.

“In creating each curriculum, scientific, professional achievements and experiences are used that relate primarily to the objectives and contents of the classes, as well as gradual and thorough determination of expected knowledge and skills. Learning objectives are allocated and systematized according to the emotional, social, cognitive, psychomotor and moral development of pupils. The curriculum for all subjects is consistent with children’s age”, they explain in the ministry. They say that when for example the term democracy is to be explained to a child at the age of ten, it is the basic, fundamental level without any complicated terms and definitions.

“They can practically realize what democracy is through an exercise in which they all take part together. Therefore when writing textbooks they should especially pay attention to the style of expression (harmonized with readers’ age), as well as the scope and contents”, they point out from the Bureau.

Textbooks in primary education during the previous Minister Nikola Todorov were a subject of extensive review because of the identified errors, illogical and difficult style of expression in the textbooks, later confirmed by Todorov himself. However, despite the announcements of their partial or complete change, textbooks are still used in regular classes.

You can read the original article here: http://scoop.mk/investigations/256.html