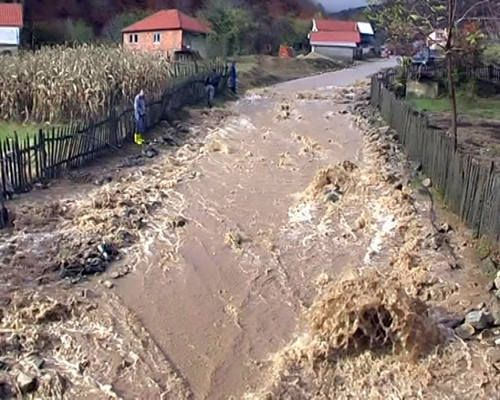 Stip – On the road to the European Union Macedonia will trip over ecology. If one day the country joins the Union, it will find itself facing two alternatives – either to close the big old menacing industrial capacities and lose thousands of jobs, or to invest millions of Euros in a new green technology, as required by European standards. The request for review of all A environmental permits issued so far, that approved the capacities to pollute to a certain extent, confirms that the EU is not joking with the requirements of environmental standards. Through the example of Eastern Macedonia – experts say there is a lack of trained, quality staff in municipalities to implement the law requiring minimum ecological standards for pollutants

A textile factory in the eastern region in the past was often pointed with a finger after several series of fish kill in the river Bregalnica. Suspicions always ended with the colored water from the factory pipe running directly into the river. Several years later the wastewater leaving the plant is colorless. Unconfirmed information is that actually nothing has changed, except that someone has taught the management of the capacity to add a chemical to neutralize the color. The story is spiced with the assertion that bleaching the water is an idea of a municipal environmental inspector, claimed to be on the factory’s payroll. Seven months before the deadline for issuing environmental permits, the capacity is still without such permission.

The plant is one of several dozen facilities along the river Bregalnica, which has not begun to adapt its technology to minimum environmental standards yet, as required by law. Of the 11 municipalities, as there are along the river Bregalnica, there are a few that have not been issued any environmental B permit. One permit has been issued in Vinica, the same as in Berovo. Makedonska Kamenica, where the mine “Sasa” operates with a history of two major environmental disasters, has no permit at all. The permission for “Sasa” is responsibility of the Ministry, but it does not preclude the municipality from the process of accordance. In Stip eight permits have been issued for seven years, while Kocani is a leader in the region with 10 environmental B permits. The waste of 36 major installations ends in the river Bregalnica, from which over 190,000 people drink water from the river and its confluents.

Why so much fuss about environmental permits, for which the owners of the facilities complain that cost too much, while the government is persistent that the directive must be implemented?

Permissions determine an operational plan of capacities for adapting their technologies to minimally pollute the environment and commit to control waste and energy efficiency.

Issuance of permits was introduced by law in 2006. Ambitious plans envisioned the process to be completed in 2008, and then the deadline to be April 2014. The civil society suspects that what failed to be done for seven years, will be completed in seven months. The NGO “Front 21/24” monitors the process of issuing environmental permits for major facilities and has found that only 30 permits has been issued for seven years. For this short period of six months remaining, even 80 permits are to be issued to the greatest Macedonian pollutants.

“It is not only the Ministry of Environment and Physical Planning which began the process unprepared. The owners of the capacities did not know what to do, so 90 % of the submitted documentation was incomplete. After that it was just a rush of certain permits as there was pressure from the public or a business owner. Very often there was a review of the permits, as happened with “Feni Industry”, as happened with “Jugohrom”, as happens with all issued, with the exception of “Usje”, says Aleksandra Bujaroska, one of the authors of the analysis of execution and implementation of the European directive on issuing permits.

“Front 21/24” has gathered and submitted the facts to the European Commission, which then asked the Ministry to revise the permits. The Ministry confirmed that they are working on the revision of the issued permits.

In the spring progress report on Macedonia, in the chapter Environmental Protection, the European Commission noted deficiencies regarding the issuance of environmental permits.

In the municipalities of Bregalnica region a special environmental protection unit can rarely be found. In smaller municipalities there is no staff trained in issuance of permits. In some municipalities the legal department deals with the permits, but it has no proper training. Small part, mainly larger ones, had one inspector and two associates working on the permits. With this capacity, citizens and NGOs expect greater monitoring by the State Inspectorate. Director Firus Memed passes the ball to the municipalities, which according to him, with decentralization, were given great powers in this area.

“Unfortunately, some municipalities are inert to this issue. In my opinion, a certain number of mayors are not eco-conscious. However, they begin to realize what it means. Deadlines are approaching. Through ZELS, the media, the NGO sector, we will continue to push environmental standards to start being applied, as deadlines are approaching “.

On the other hand, municipalities believe that they will be able to work after inspectors start to punish polluters, as it is prescribed by law. It is also the opinion of the environmental associate in Stip, Vlatko Panov.

“I think we are now sufficiently teamed. It is just to go on the field and authorized inspectors to begin to work”.

However, the Director of the State Inspectorate for Environmental Protection Memed says that every capacity is controlled at least three times a year.

“Environment is a specific area. The Inspectorate has specifics in its work, which is not with so visible supervisions as it is in other inspections that put seals, stickers…According to the law the Inspectorate issues a duty to act with a certain deadline. If entities do not act, then we are strict and penalties are really high. For illustration – penalties for discharging emissions in water with a caused damage are from 70,000 to 100,000 Euros. None of the entities will admit that it itself is the cause. The proving procedure takes time. The Inspectorate amnesties nobody”.

Environmental crime expert, Professor Marina Malish says that for years she has been following the issue, but has no information about a court judgment.

“Pollution in a particular area is evident. The media inform very well about certain environmental problems. Inspection services in charge are to impose fines. However, as citizens and as experts we see that pollution is evident, on the other hand we do not know about any inspection procedures”.

Professor Malish locates the low level of issued permits within the owners of facilities, who consider the investment in environmental standards to be a waste of money.

“It is clear that the capacity should comply with the European environmental standards. Facilities that pollute more than allowed cannot work. Although the investment in environmental standards is irreversible in a way, as is the removal of “hot spots” – the lindane in “Ohis”, the slag in “Jegunovce”, the remnants of the Veles Smeltеry. It should be repaired by certain investment and that investment is irreversible. The problem from the perspective of owners is that they give money but there is no product, no product of investment”, says Marina Malish.

It is interesting that the law requires constant supervision of what the capacity is obliged to in order to obtain the license. At the environmental B permits, it is municipalities’ work. But there is a problem, too. According to the analysis of the NGO “Javor” from Zrnovci, which implements a project to strengthen the capacity of municipalities to issue environmental permits, municipalities are not aware of the importance of supervision. Zaklina Golcheva who works on the project, says that environmental permits are very often reduced to a stack of papers prepared by paid consultants and commitments from polluters which are never applied. The law will be partially implemented, administrative part will be worked, but standards never really revive, that is, pollution remains.

This directly reflects scientists’ plans, who defined the Eastern region as a space for organic farming. The Professor of Agricultural Faculty in Stip, Vasko Zlatkovski says that the study of organic production has detected an obstacle in livestock farms, the mines Sasa and Zletovo, rice fields, and copper coming from Bucim. Municipalities are to be blamed.

“Municipalities protect themselves by issuing permits. By law they are obliged to visit the field, to review and to issue or not to issue a permit. However, the problem is when there is pollution. They all have paper, elaborate, but provisions are rarely observed. In 1994 in Europe the so-called Nitrates Directive was passed where it is noted how much can a particular animal farm emit, the time and to treat their land with manure. Here it is not obeyed and accidents happen”.

The Ministry of Agriculture, Forestry and Water Supply in the fishing study about the Bregalnica basin for the period 2011-2016 through analysis confirms the effect of pollution along the river Bregalnica. Next to the Bregalnica spring in Berovo there are 21 species of fish, including a trout. Immediately under Makedonska Kamenica, fish species are reduced to only two. An illustrative example is the one with Stip. At the entrance of the town, along the river, 2000 units of fish are spotted in 1000 square meters. At the town exit, under the sewerage wastewater collector, there are only 82 units of fish per 1000 square meters.

Municipalities, as one of the biggest polluters, with no wastewater treatment plants, except for Berovo, hope that foreign donations will manage to solve pollution. Meanwhile, they will try to catch the deadline for issuing environmental permits – April 2014.

What does an environmental permit standardize?

The permit determines a list of information on the toxicity and information on environmental impact. Data is provided on fuels and energy used in the processes. It also contains information on the quantities of raw and auxiliary materials, which are usually stored on the site, as well as annual amounts used.

In other words, the polluter pays for the permit which allows controlled environmental pollution.

The polluter is obliged to tell how much it pollutes

Under the Law on Environment, the capacity that will obtain a permit shall continuously inform the municipality about the quantity of emissions, that is the level of pollution it performs. This is differently interpreted by the government and civil society. For civil society organizations this means that the municipality should find a way to constantly inform about the level of pollution, while in ZELS documents, this is not mandatory. If the law is literally applied, in the case of Skopje, this means that citizens in the winter period of air pollution will always know what particles the air contains and what the level of contamination is.

You can read the original article here: http://scoop.mk/investigations/205.html